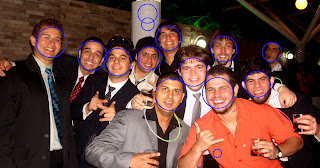 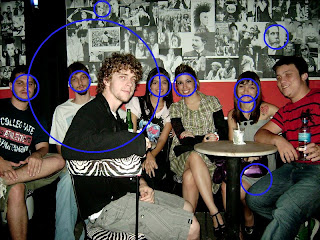 I think it works pretty well :)
You can disable the circles and just get messages with the faces' positions and do whatever you want with them.
Other than those, there's also 'textwrite', 'templatematch' and 'faceblur' elements.
Current work
I've been working on a simple base class that will make it easier to map simple 1 to 1 OpenCV functions into elements and providing some common properties (like ROI and COI) and GstBuffer-IplImage conversion. This will help covering more functions and should be enough to get me acquainted again to the API, after it I can go for the fancier stuff.
For example, take cvSmooth function, we should only have to write code to map its parameters into properties and a simplified chain function that already works on IplImages instead of GstBuffers.
Repositories
gst-opencv's main repository is at github, I have my personal branches here. From time to time I ping Elleo to upgrade at github, but I hope we can get this upstream in the next weeks.
Posted by thiagoss at 2:29 PM

Excellent! I am looking forward to using the base classes. I would encourage you to release early and often. :)

I'm particularly interested in all the helper functions I imagine you'll be creating, such as converting back and forth between GStreamer caps and OpenCV types. The first element I'd like to write is colorspace conversion.

I'm just wondering if you happened to be able to compile gst-opencv on a mac? I would appreciate any hints and experiences you have on a mac.